No posts to show

Hello Brother Peter! I've been really busy with family stuff. I've been away from social media for a while. So much has happened in the last 2 months.
Please keep my daughters and my daughter's fiancee in prayer. My youngest, Crystal, is still homeless and slipping away. My oldest, Tashe, is due to be released on 10/30/2019 from prison. Yeshua has brought her along way.
And Steve, Tashe's fiancee, was arrested in August for drugs. I'm not saying that he is completely innocent, he has a past record. But he has been targeted by law enforcement here. The Ruach HaKodesh has shown me that most of what was found was planted.
Over the last 6 years, he has been arrested on 7 occasions. All, but 1(possession charge) charge was dismissed for lack of evidence or witnesses. He has been on house arrest for about 3 1/2 years out of the 6.
The prosecutor is trying to say that he is a violent criminal and they want to lock him up for life. Which is what they tried to do to him in June on a domestic violence charge. Which all charges in the cases were dismissed. This is what their basis is for a life sentence.
There is well documented corruption in the city and county police forces with the ACLU for more than 15 years.
I've giving all this to Yeshua. Please agree with me on these matters. But above all, Yah's Will be done.
May Yah bless you and every family member here at Remnant House! And I love each and every one of my brothers and sisters here! 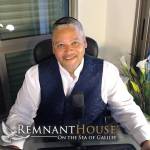 Amen, thank you brother. It seems like with every little blessing that comes from Yah, another road block or tragedy comes right behind it. Me, I just keep praying. Because I know the how this all turns out! Yeshua wins!

Are you sure you want to unfriend?

Are you sure that you want to remove this member from your family?

New member was successfully added to your family list!